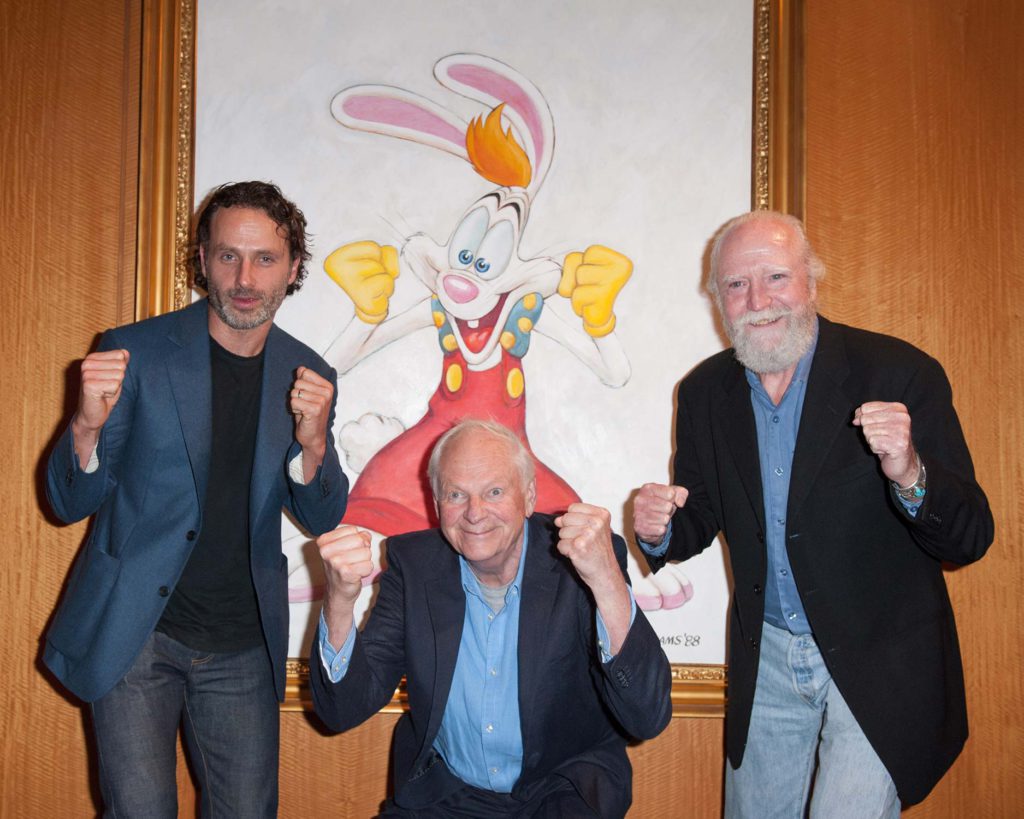 Richard Williams won two oscars for Who Framed Roger Rabbit (1988, directed by Robert Zemeckis), one for the animation direction and the other for special effects. This was a ground breaking film. Cartoon animation was combined with live action to create a story about a cartoon rabbit who is framed for a crime he did not commit. Set in the 1940’s the Toon characters live along side humans, they are the underdogs of Hollywood, consigned to ‘ToonTown’ and working as low wage performers. Expertly combining film noir with slapstick comedy, the film succeeds in drawing the audience in to care about the Toons who become real, living characters amidst real world actors. We are drawn into believe in a completely make believe world, with no reservations, and tackle the serious themes of racial discrimination at the same time.

In December 2018, The BFI screened Who Framed Roger Rabbit with a Q&A with the Animation director after. This is a writeup of the talk he gave and the questions after. 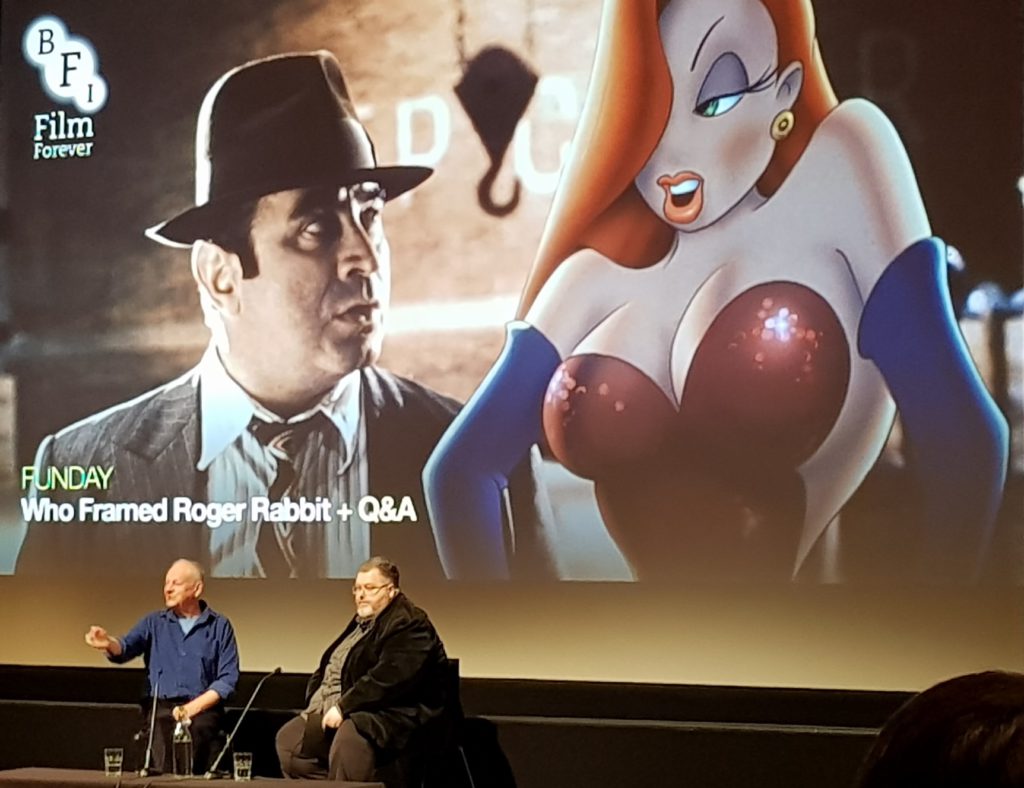 Richard Williams at the BFI screening of Who Framed Roger Rabbit, December 2018

Why he took on the project

Initially he was reluctant to work on this film, because of the potential flatness of it. The technique had been done before in Mary Poppins but 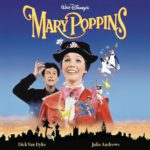 was not very convincing. He didn’t like Mary Poppins, and didn’t want to make something that he felt was flat. The two mediums can cancel each other out, the animation can appear to simply sit on the live action frame as a flat sequence on top of it. Flat drawings pasted onto live action didn’t work for him. He only wanted to do the movie if he could overcome this problem.

The director (Bob Zemeckis) also wanted to make a modern movie and be free to move the camera. The camera needed to move to bring both mediums together, to make it convincing, the animated characters have to appear to be in that same space as the live action characters, so by moving the camera the animated characters are seen in a three dimensional way, just as the live action characters are. Many studios wouldn’t do the project because they didn’t want to move the camera, it was seen as too complicated to do. However Richard had just done this on a Walt Disney commercial where he broke all the rules and discovered that new things were possible with a bit more effort, so he was very happy to do this film.

The technology to do it 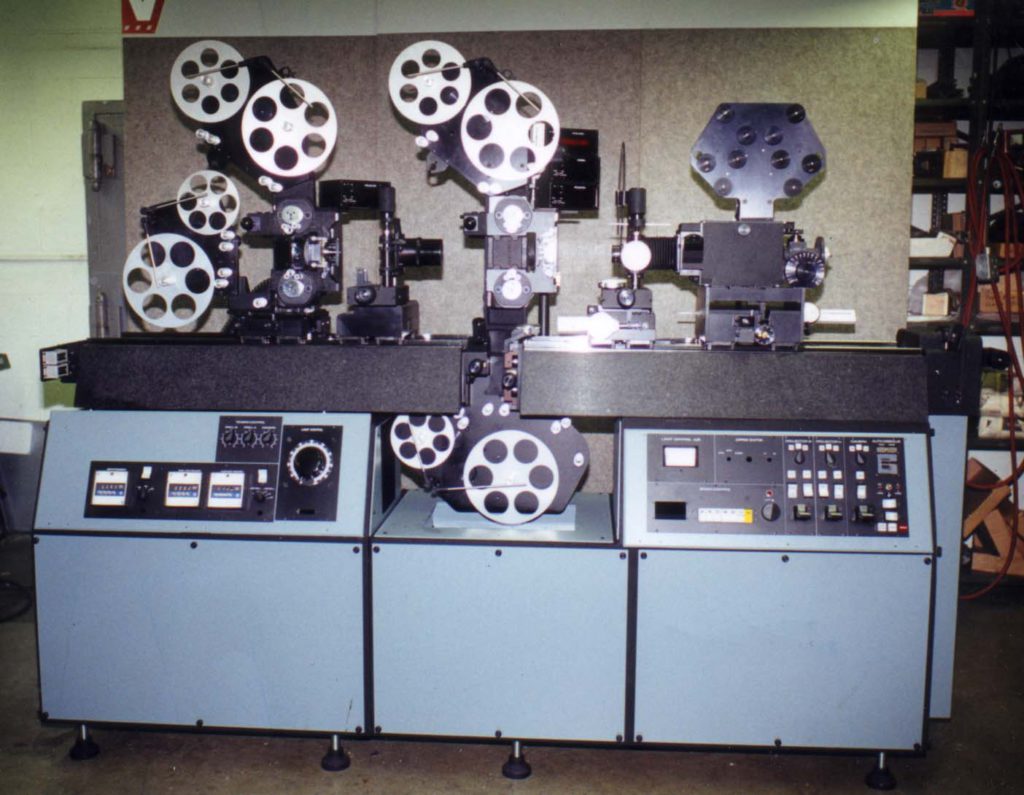 They needed the improvements of optical printing to combine the two mediums, so that the two forms could be printed into the same frame, rather than the animation appearing to sit on top of the live-action. Star Wars: Return of the Jedi had just used this technique already for the Speeder Bike sequences (Ken Walston at ILM), so they could develop and build on this technology. 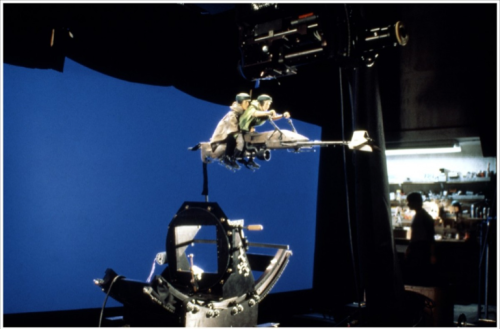 They wanted the characters to be 2D, as they are period characters and needed to look like that, so he suggested 2.5 dimensions, which is a 2D looking character that you can still track the camera around as if it was 3D.

Keeping it at his own studio

He insisted on doing the work in the UK, not moving it to Hollywood, which they initially wanted him to do. So Disney seconded the studio, took it over so that it was restructured just to do that film, and grew to 320 people working on that film. It started with just 40. It was a Hollywood blockbuster film, but the animation was all done in London, an extraordinary combination of very high calibre artists, a very professional production where everyone was at the top of their game. Everyone knew it would work.

Combining animation with live action also means that the animation had to be done on one’s because the two motions jar if you set 2’s with one’s. This double the normal workload. Moving camera means that all animation has to be done on one’s, even for pauses and slow movements. Each frame of camera movement were printed out as a reference so that the animated character could be positioned correctly in the space as that space moved frame by frame. 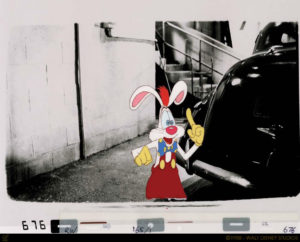 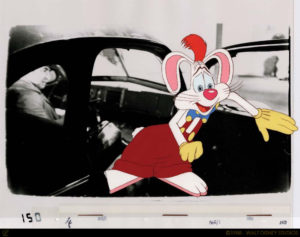 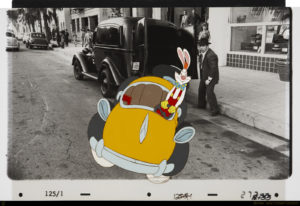 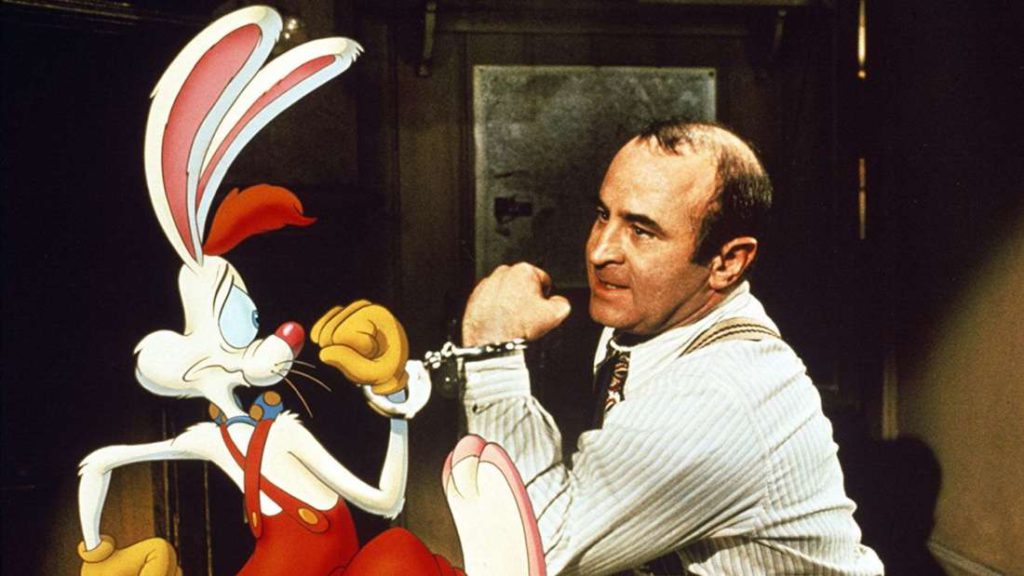 After a test shot that would combine all the most complex aspects of the film, they realised that it would work and look great, and what the workflow would have to be. In fact it was this test shot, that was shown to a test audience of kids, that was the deciding factor for whether the producers went ahead to fund the movie.

Although he was invited to the film shoot, he said after a while, you don’t need me, just shoot the movie the way you want to and we’ll animate to the shots we get. Bob and Roger would sit at the Steinbeck looking through the rushes, Bob would say where he wanted the Rabbit and Roger would sketch it out for him, so they both knew what was needed. 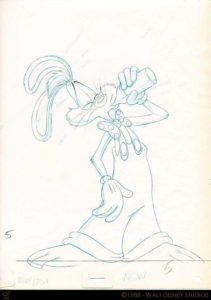 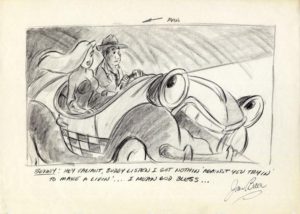 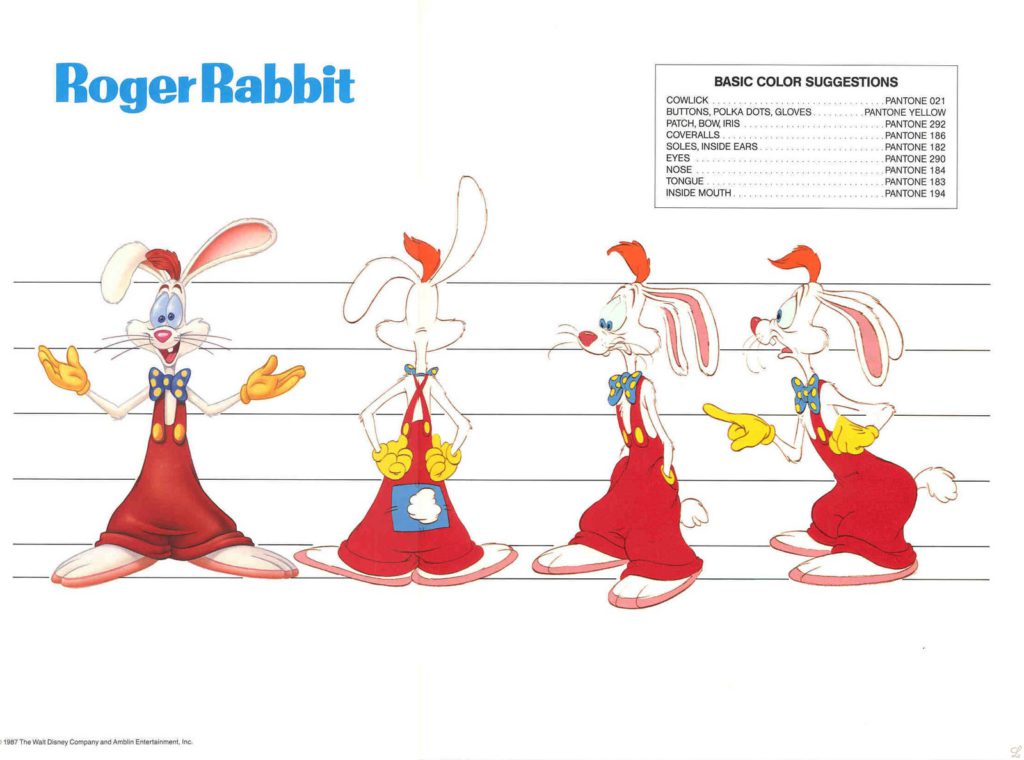 Design of Roger Rabbit, the 3 keys:

It was a Frankenstien combining Droopy’s peanut shaped head, Goofy’s trousers, Briar rabbits feet,  Mickey Mouses yellow gloves, Oswald the Rabbit ears, Porky Pigs bowtie. The only original thing was probably the one tooth to the side.

Disney studios had spent 7 years trying to develop this character, but it just looked like bugs bunny, and it was grey too. So he made it red white and blue like the American flag, they loved it. (Here’s a test from the time that Disney attempted to adapt Gary K. Wolf’s book “Who Censored Roger Rabbit.” from 1981 to 1983)

Russell Hall was the main animator for Jessica Rabbit. She was a combination of: 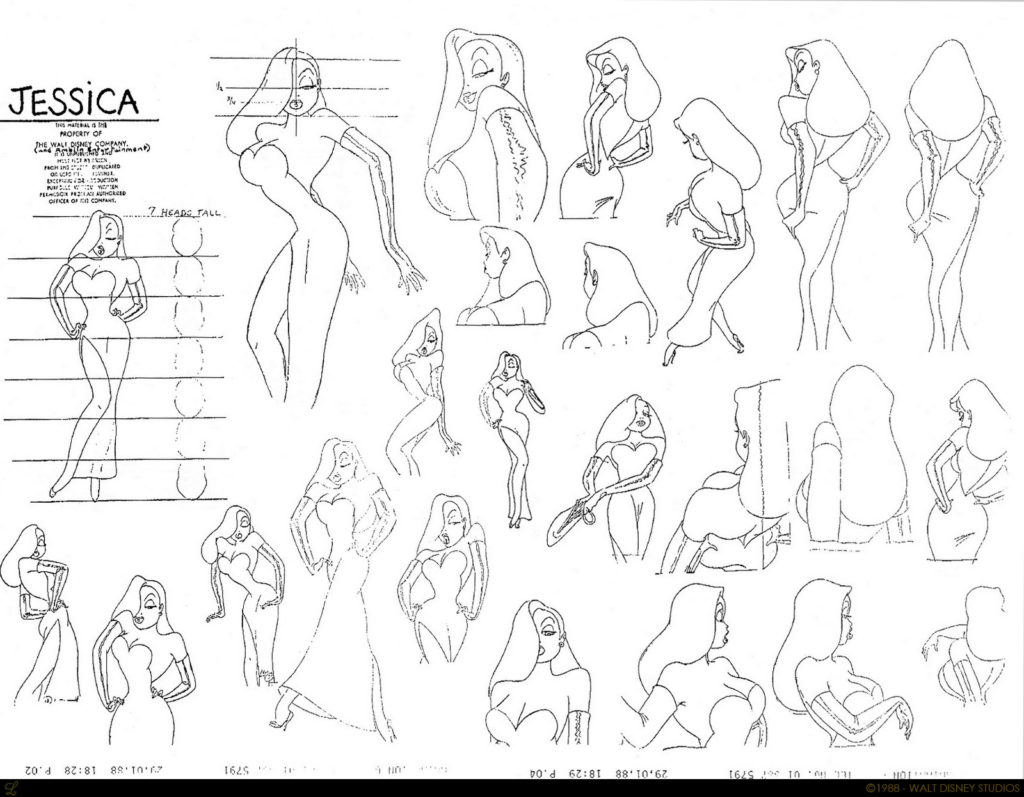 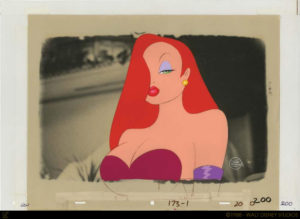 All the other characters had to be hired from the other studios. Through the film, more characters were added as the studios who owned them realised that the film was going to be a hit and wanted to be a part of it. Virtually every major carton character from the late 1940’s was in the film, with the exception of Felix the Cat and Popeye the Sailor whose licensees couldn’t agree on terms with the films producers. They had to be respectful to the characters they used and get them just right. Also the characters had to be in the correct era. So they are 1940’s characters, and bugs bunny in the 1940’s is different than Bugs Bunny at a later date. He also added some Max Fliesher inspired characters, in the background which he called ugly characters. 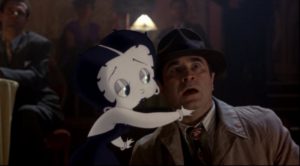 There was talk of a second film after the successful release, but he was done with the Rabbit by then, and would not have done a second movie. He got out alive with two Oscars.

For a limited period Warner Brothers were distributing Disney films in Europe. There was a temporary marriage between Disney, Warner and Spielberg (Zimmekis was with Spielberg), which felt wouldn’t last for ever. A short they made called ‘Roller Coaster Rabbit’ (Roger son Alex animated on this film) resulted in a fight over ownership, and the trinity unravelled. So a sequel to Who Framed Roger Rabbit could not happen. 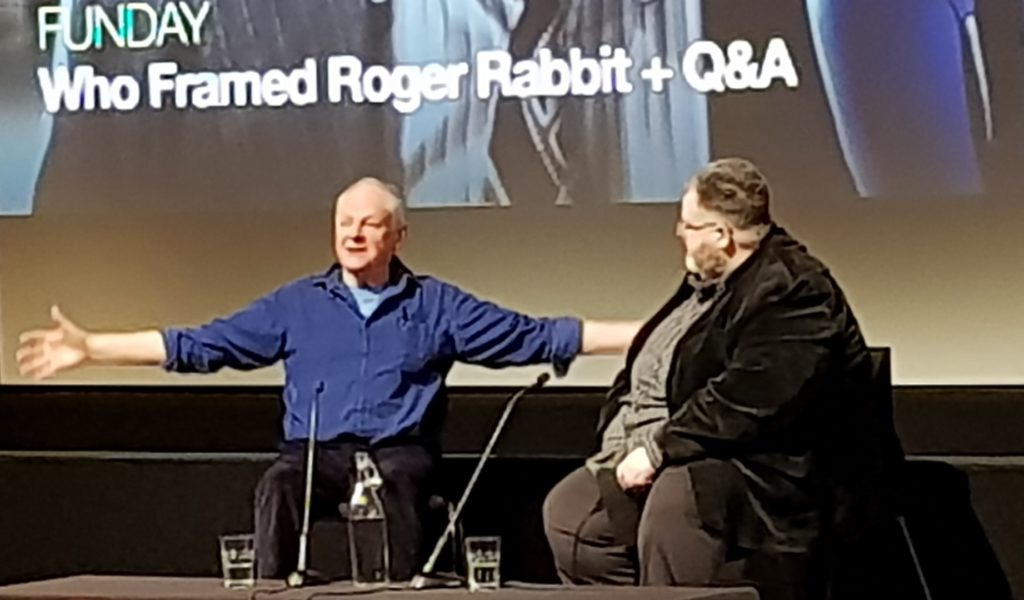 Richard Williams at the Q&A

Q: What inspires you?

When he was 5 he saw Snow White. After that he found a cartoon cinema, where he went for years, to just watch cartoons. His favourite character is droopy and he actually did the voice for it at one time.

Q: How did you get the interaction between the humans and animated characters? 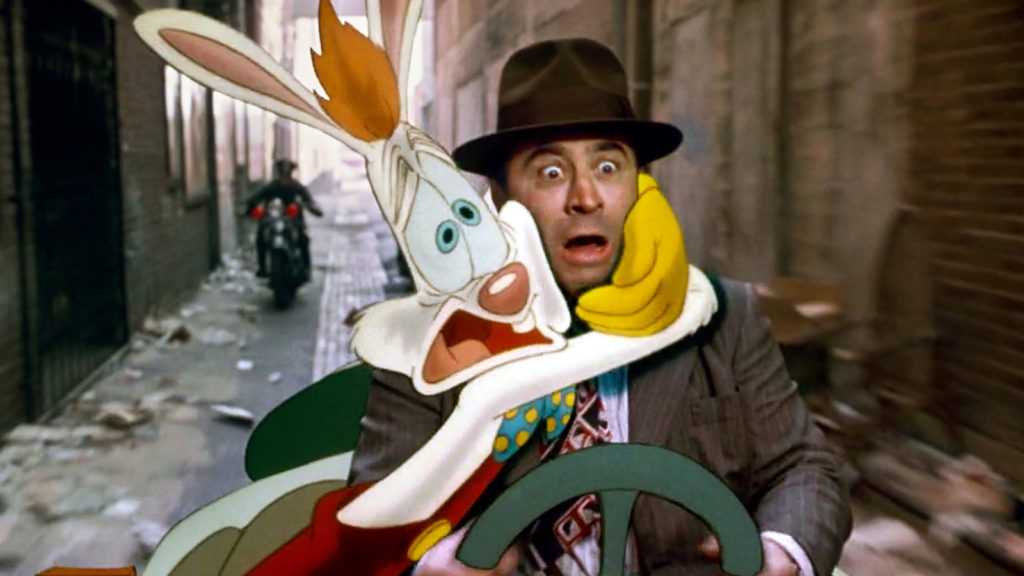 Q: Does drawn animation still have a place today?

He was Oscar nominated a few years ago for a beautiful pencil drawn animated film (Prologue, 2015). He says he is still getting better as an animator. For large productions it’s all about money. If it can make money they will do it. It’s down to what the audience want to watch. It’s actually cheaper than some CGI, it’s a myth that drawn animation is more expensive. 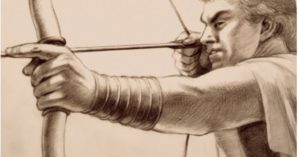 Learn both, digital and drawn. The basis of animation is the same for both anyway, it’s just the mechanism of how to deliver it. The knowledge of movement and the performance is exactly the same, it’s just that the computer stuff is high, high tech marionettes. You make a model and then have to move it with a mouse instead of a hand, but you still need to know how to move it. You can be a terrific animator these days without having to know how to draw. 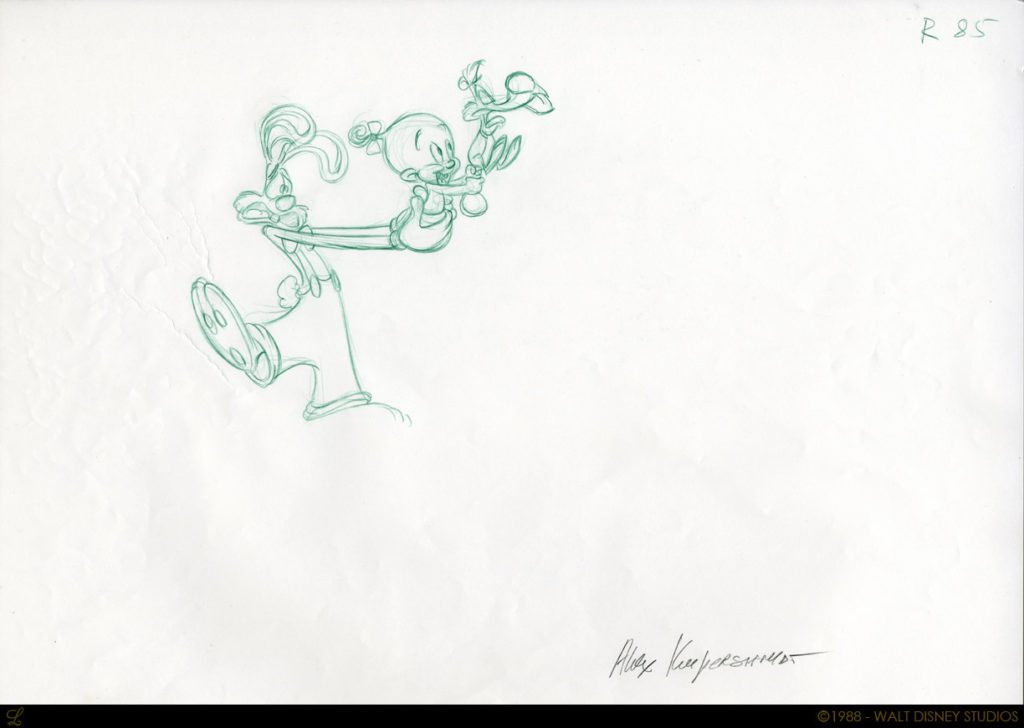 Q: How did the actors deal it, did they have anything to act against?

No they had to act against nothing. So they had their own marks to act to. For example the Rabbit’s eyes are about the height of a belt buckle, so Bob Hoskins had to look at the air just in front of the height of a belt buckle. He has incredible concentration so he did it well. One shot had a mistake, and the actors eye’s were looking up at the rabbit, so they simply animated the rabbit elongating for no reason, apart from him being neurotic, so that the actor had to look up at him. It worked, they even used it on the trailer. Throughout the film the animators simply drew the characters into where they needed to be for the actors eyes, and the interactions with the actors, so that it worked.

The voice over artist for the Rabbit, wore a rabbit costume to help him get into character when he did the voice over for the film. 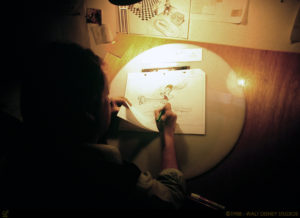 Here is a video of an interview with Richard Williams about Who Framed Roger Rabbit, at the BFI back in 2014.